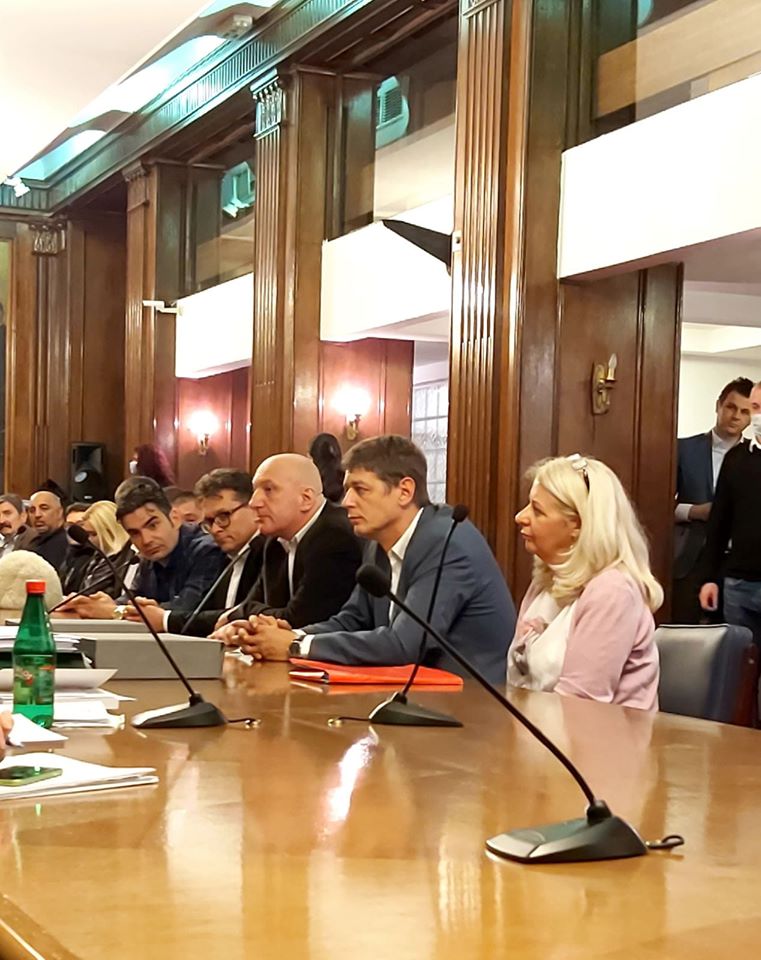 The elections for deputies of the Republic of Serbia in 2020 were scheduled for April 26, the same day as the local and provincial elections. However, due to the outbreak of the Corona virus pandemic and declaring a state of emergency, the date of their holding has been moved to June 21, 2020.

The elections for deputies of the Republic of Serbia in 2020 were scheduled for April 26, the same day as the local and provincial elections. However, due to the outbreak of the Corona virus pandemic and declaring a state of emergency, the date of their holding has been moved to June 21, 2020.

The President of Serbia, Aleksandar Vucic, announced the elections on March 4, 2020, and since then begin to run legally prescribed deadlines related to election activities.

According to the current legislation, all lists must collect at least 10,000 voter signatures, in order for their candidacy to be accepted by the Republic Election Commission (REC).

Parliamentary mandates will be distributed by D’Ont’s system of maximum quotients. Given the turbulent political events, and the announcement of a boycott of a large part of the opposition, the government representatives changed the decades-long election legislation, so it is a little more than two months before the legal deadline for holding elections, census lowered from 5 to 3% (also applies in local elections). Additionally, thanks to the amendment of opposition MP Gordana Comic, a quota is envisaged, according to which each list will have to nominate at least 40% of women.

After the attempts of inter-party dialogue at the Faculty of Political Sciences of the University of Belgrade in the mediation of the non-governmental sector, negotiations were organized with the aim of improving the election conditions, which was mediated by the delegations of the European Parliament. After three rounds of dialogue, Members of the European Parliament noted that at that time there were no conditions for fair and honest elections, but that it took time to implement the agreed measures:

-Restricting the use of public resources for political purposes;

-Prohibition of abuse of office of directors of public companies;

-Introduction of a mandatory deadline of five days for the response of the Anti-Corruption Agency in the case of report abuse during the campaign;

-Election of three missing and two new members of the REM Council;

- Obligation of the National Assembly to establish a supervisory board for monitoring the election campaign;

-Introduction of a website with information about the voter list, with the possibility that the voter can request information whether he voted or not.

However, on March 15, 2020, a state of emergency was imposed due to the outbreak of the Corona virus pandemic. According to the Constitution of the Republic of Serbia, the National Assembly cannot be dissolved during a state of war or emergency.

After the end of the state of emergency, the elections for deputies of the Republic of Serbia, local and provincial elections were postponed to June 21, 2020.

Electoral lists of candidates for deputies of the National Assembly, the Provincial assemblies and local (where they are announced) assemblies shall be submitted no later than June 5, 2020.
in 24 hours.

21 electoral lists will participate in the parliamentary elections

The best ranked is Dr. Predrag Balasevic (1974), a doctor from Bor who is second on the list just below Cedomir Jovanovic. Boranin Miroslav Grujic (1964), a graduated mining engineer he found himself in 16th place on the list, and Dragana Zivkovic Obradovic (1964), a graduate mining engineer also from Bor on the 19th. Dejan Zivkovic (1967), an entrepreneur from Boljevac, is at number 21, Zavisa Zurz (1976), a mechanical technician from Bor on the 27th, and Lidija Peric (1969), an economist from Boljevac on the 50th, on the 54th place is Darjan Karabasevic (1985), a professor at the University of Bor, on the 66th Dragan Aleksic (1963) a pensioner from Donji Milanovac, municipality of Majdanpek, on the 83rd Rade Andelic (1954), a pensioner from Bor, and on the 95th Marija Velkanovic (1996), an economist from Boljevac. Candidates for MPs are also Miomir Djordjevic (1960), a pensioner from Zajecar who is on the 127th place on the list, then Dejan Karabasevic (1973), a graduate electrical engineer from Boljevac on the 177th position and Dragan Toroglanovic (1966), a pensioner from Boljevac who is on the 185th place of the list.

During the summer and autumn months of 2018, several political coalitions, parties and movements were formed in Serbia, primarily those of the opposition. These include the Alliance for Serbia, the Civic Bloc 381 and the Serbian Patriotic Alliance. In this regard, President of the Liberal Democratic Party - LDP, Cedomir Jovanovic he himself announced the formation of a coalition, whose backbone of the political program will be pacifism. Although the LDP is not part of the current ruling majority, he criticized the actions of the Alliance for Serbia, claiming that in terms of a solution for Kosovo and Metohija, Aleksandar Vucic seems more modern than that coalition. On September 29, Jovanovic informed the public via his Facebook account that the coalition had been formed, but did not specify who had joined the LDP in that political alliance. Since the end of September 2018, there have been no news or indications of possible activities related to the coalition itself, and it seemed that Jovanovic gave up on it. However, when the regular parliamentary elections in 2020 were called, the name Coalition for Peace began to appear in the media again, and on June 5, a list was registered, and on June 8, a list was announced, which included the LDP, the Vlach People's Party, the Bosniak Civic Party and the Montenegrin Party, as well as several other movements and associations. Although the coalition includes several parties and national minority movements, The REC rejected the possibility of declaring the list a minority, because such a request was "submitted too late".

The Administrative Court, deciding on the appeal of the COALITION FOR PEACE, declared against the decision of Republic Election Commission from 10.06.2020. years, in the case of protection of the right to vote, on 13.06.2020. years ruled that the appeal should be dismissed. The list is not a minority and goes to the 3% threshold. 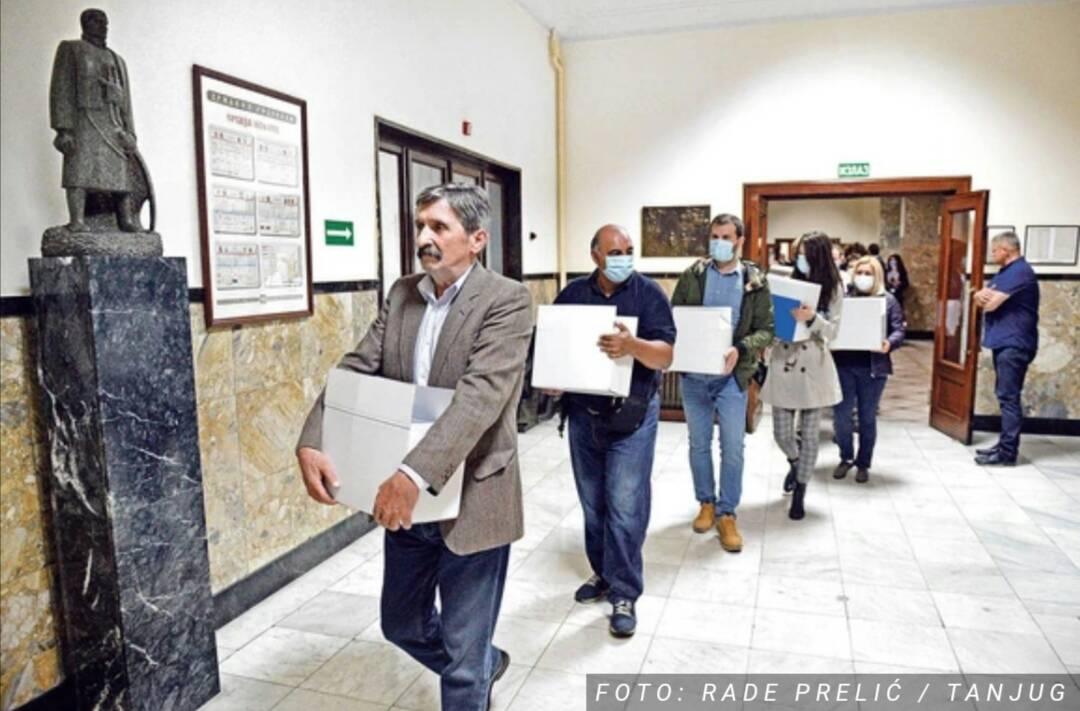 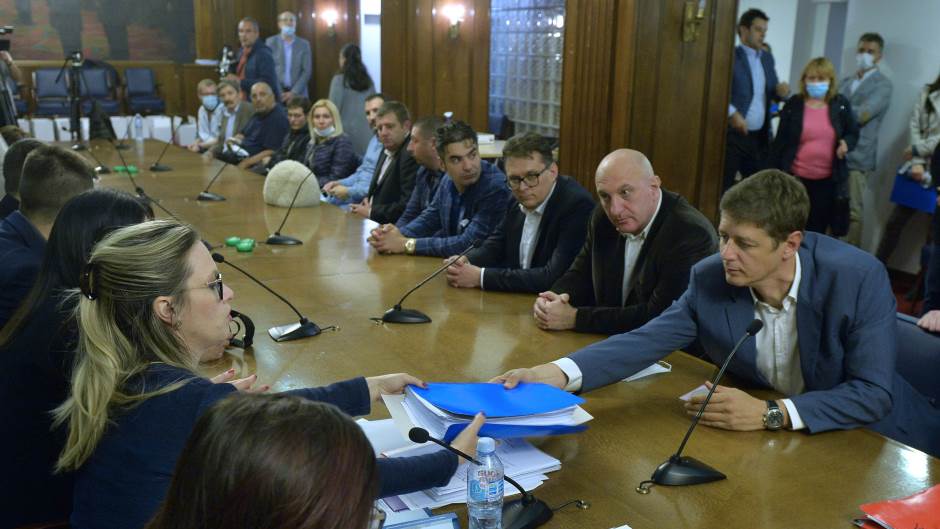 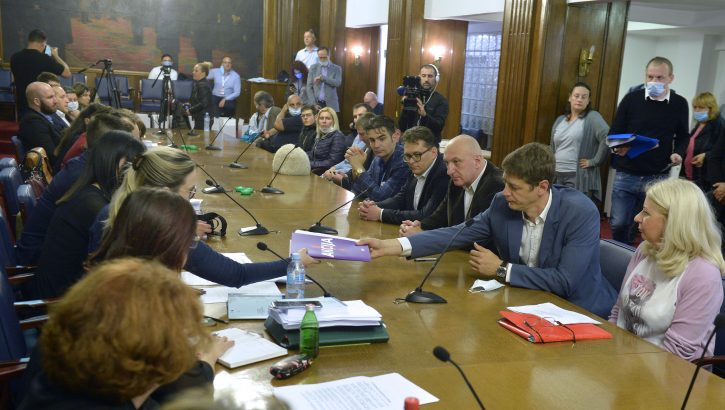 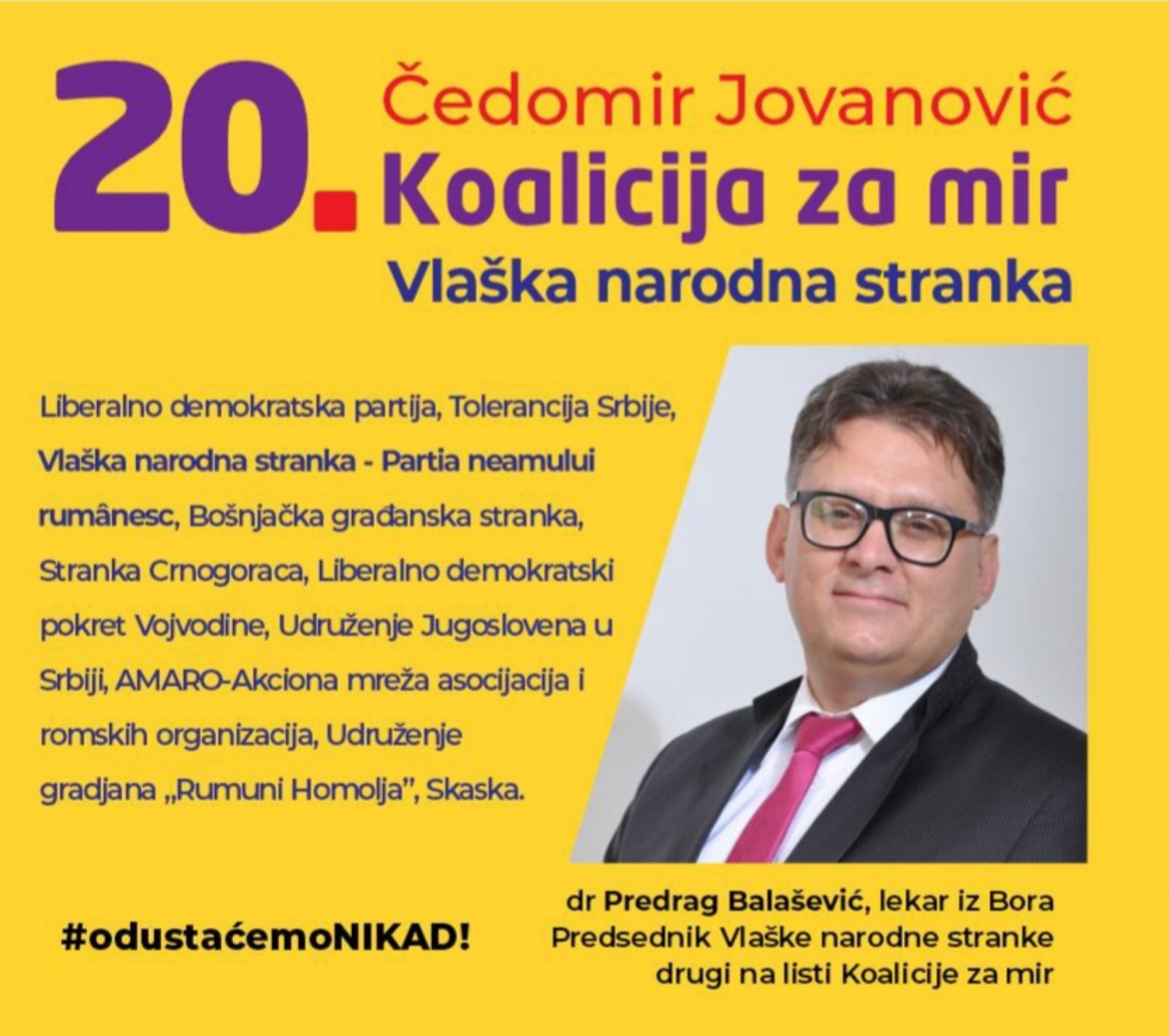